With the IoT explosion creating more innovation in the industry and more and more products becoming “smart” products, common consumer products are becoming obsolete in half the time they once did.

This, in turn, creates a burden for many manufacturers who are trying to keep up with the pace of innovation — especially if they leverage large networks of downstream dealers and resellers to bring their products to market.

One of the world’s leading manufacturers of imaging and information solutions for business and home use needed to respond to the growing pressures from their global community of 600+ dealers and resellers who struggled with order lead times and processing delays. They needed a complete restructuring of distribution logistics and the conversion of various internal and third-party order support functions into a centralized operation while maintaining a margin profile that would provide enough cash flow to support ongoing product innovation.

As one of the world's most successful brands in imaging and information products with strong market share in business solutions as well as the U.S. consumer market, the company had a well-established supply chain logistics infrastructure. As one of a number of equally significant brands under a large parent company, several components of that infrastructure were built on a core of colocated facilities and shared services.

Facing a period of stagnant growth and new market pressures driven by increasingly competitive product innovation pressures, the company engaged with one of the top consulting firms to evaluate all aspects of their business. In evaluating the supply chain and existing route to market processes, four key areas were identified for focused improvement and business modernization:

While the company remained in a state of neither growth nor decline, other business units within the corporate structure were facing significant change in the form of an overall decline in sales and/or supply chain restructuring. This overall shift in the corporate dynamic was impactful, as the company was burdened with a disproportionate amount of the corporate allocation, paying a premium for underutilized facilities and shared services that were established to support a much larger corporate structure, now in decline.

The downstream network of more than 600 global sub-distributors, dealers and resellers that represent a significant share of the route-to-market success of the company’s products, had raised several concerns about the delays in delivery lead times and the inconsistent reliability of and access to estimated arrival time (ETA) of shipments. Through the efforts of a third-party survey process, the company was able to identify the top-ranked issues from its reseller network. 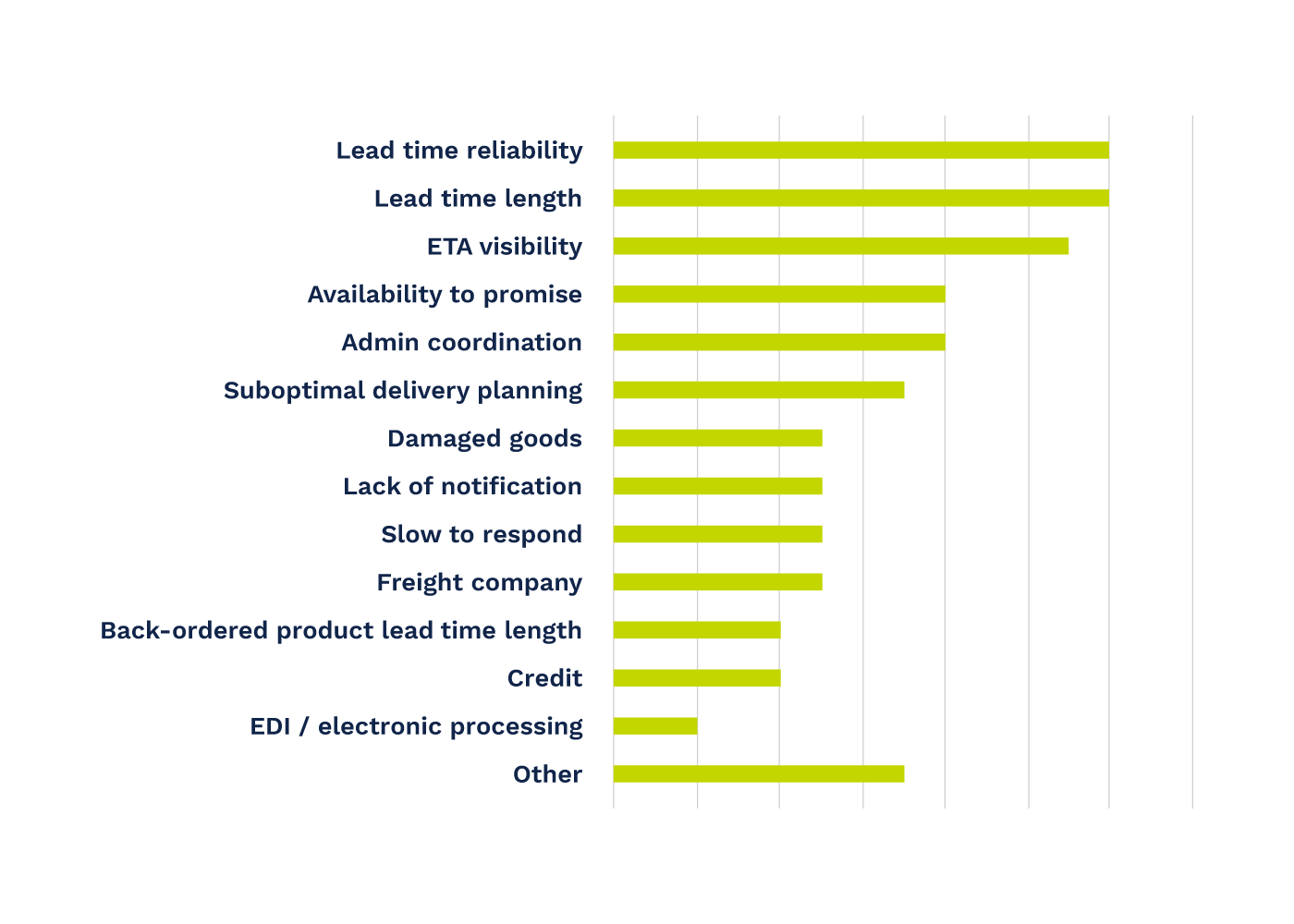 These inconsistencies in lead time, delivery estimation and lack of visibility into shipment status prevented the dealers from being able to provide quality service levels to their customers.

Further research on the company’s order execution and delivery support functions identified inefficiencies caused by excessive complexities in their process flows. A number of the critical path functions in the process were managed by a mix of external and internal resources. The credit and collections functions were outsourced to one partner; third-party logistics to another partner; planning, invoicing and order management was managed in house; while support staff in groups like information technology and accounting were managed in a shared services model operated by their larger parent corporation. This disparate structure created complexity in the management and control of critical logistics functions.

The company knew that they needed to improve the dealer experience in a number of ways. Reduction in order-to-delivery lead time, improved order and ETA status as well as timely order and credit processing were a few areas that required improvement. The delivery execution delays were not only impacting the dealers’ ability to provide satisfactory levels of service to their customers, but they also created lags in the order processing and credit processing — the impact of which created a situation in which their cash flow was tied up for longer periods of time, creating even greater financial stresses for them.

In their ongoing engagement with the consulting firm, the company chose to leverage the expertise of a third-party logistics (3PL) company to help them create a solution strategy that would ultimately become part of the long-term solution. The driving factors behind the decision to turn the logistics operations over to third-party provider were:

Aside from the capabilities to take on the operations of the high-volume global supply chain logistics of one of the largest business and consumer products manufacturers, the chosen logistics provider was going to be tasked with presenting a solution that included the following criteria:

After completing an extensive selection process, the company selected the solution outlined by the team from Tech Data. Additionally, Tech Data was selected as the partner of choice to execute the modernization and long-term management of their supply chain operations. When the selection process was later reviewed, the company shared that, ultimately, their decision was made due to Tech Data's:

The selected solution Tech Data presented included recommendations to address all the identified areas of improvement. Some of the details of the proposal included:

Prior to initiation of the project, there were well-established KPIs identified to measure progress and outcomes that had been mutually established by the company and Tech Data. In the instance of this particular project, there were measurable process improvement results early in the first year of implementation. As such, the company was able to quickly identify the anticipated return for their investments and efforts. Below are the details of the improvements in each of the target focus areas.

Six months into the program, the proposed variable pricing structure proved to be more than 90 percent accurate, identifying the greatest variances in dimensional and accessorial freight charges, which had been omitted in the company’s budget. Having executed a variable pricing strategy, the company was invoiced monthly for “price per put away task,” “price per pick,” “price per carton/pallet pack” and “price per cubic ft. occupied,” so they only paid for services performed and actual space occupied. Actual logistics fees were able to remain cost-neutral, but the company was no longer burdened with the overhead costs that didn’t directly support their business.

Another noticeable improvement after the company integrated with Tech Data was a significant reduction in overall order cycle time. Pre- and post-integration order cycle times included:

In addition to the reduction in hard costs, corporate overhead and order cycle time, the integration with Tech Data also helped significantly reduce complexity. Tech Data assumed the role of credit and collections as well as warehousing — two functions that had been outsourced to different organizations before the partnership. Tech Data’s global SAP ERP was a single connection point for the company, and the appointed program management staff was a single conduit through which the company shares its voice to Tech Data.

Obtaining a greater experience for the dealers, distributors and resellers that carried over 60 percent of the transactional volume for the company was as critically important to the success of the future growth of the company as any other factor in the project. Direct feedback from this dealer community — as measured by a post-implementation feedback review — validated that Tech Data helped the company achieve improvements in the top areas of frustration for the dealers:

As a result of this significant transformation, the company’s sales and marketing teams now spend less time involved in supporting their dealers with order and back-office questions and problem resolution, and can instead focus solely on revenue-generating activities. Dealers are not being asked to “buy in” excess incorrectly forecasted inventories, but are now focused on “selling through” demand that’s generated by their customers.

While this company was content to provide better service to their dealers in a cost-neutral position, they, in fact, have realized an estimated 12.7 percent reduction in overall tangible cost (transportation and handling alone), and have been able to reduce and redeploy associates into revenue-generating positions. This, along with a much more reliable supply chain with faster-turning inventory, has truly positioned the company for exponential profitability and growth.

The dealer community has applauded the company for its bold and aggressive transformation and willingness to acknowledge and address the operational challenges they have faced for several years. Tech Data has now set the foundation of the program and is in a position to seek additional ways to provide ongoing value through continuous improvement strategies and investments.

Short and reliable delivery cycle times are paramount in supply chain management, but it doesn’t end there. Tech Data Global Lifecycle Management gives technology companies the freedom to focus on the road ahead by providing end-to-end customer and product lifecycle management services. Leveraging our team of experts, global logistics network and over 45 years’ experience, we design solutions to release precious capital from your business so you can focus on investing in your transformation journey.

Fill out the form below to get in contact with a services expert today.